According to Transparency international lobbying corresponds to “… any direct or indirect communication with public officials, political decision-makers or representatives for the purposes of influencing public decision-making and [is] carried out by or on behalf of any organized groups”. What is usually misunderstood is that if properly established and regulated lobbying can be a mean for freedom of speech and enhance the quality of decision making. In that way lobbying is essential for democracy. Unfortunately, in practice lobbying is far from being so democratic and fair. In fact, it’s usually seen as an unscrupulous tool in hands of big influent industrial groups in order to turn the legislative situation into their advantage. Which is why this type of advocacy has such a bad reputation. This alarming situation is even more comprehensible giving the following fact: “6 out of 10 European citizens consider their government to be seriously influenced or entirely co-opted by few vested interests” (Transparency International). Therefore, opaque lobbying represents an important risk of corruption for the European Union.

At the same time private public ties within European institutions had always been strong. The supranational power at its beginning was very weak and had legitimacy issues. EU institutions needed member’s national economic figures. Unfortunately, such informations were jealously kept by states’ governments for the sake of preserving control over their industrial policy. To gain in authority the EU administration decided to bypass states and communicate directly with economic interest groups. Th EU administration was encouraging in every possible way the formation and the establishment of European corporate federations at Brussels. In this way economic representatives contributed already in the 60’s to the elaboration of European public policies. The ties are also strengthened by the similarity in academic backgrounds of public officials and economic representatives. They both share values about free trade and free market. It is also very frequent that the elected officials after their mandate transit in the private sphere and vis versa, enhancing in such way the so called “revolving doors” phenomenon.

All these conditions that at a certain time were favorable to EU’s development are now representing a relevant threat. Today’s public trust is at an all-time low and Transparency International’s indicators (see statistics) bring serious concerns about the capacity of EU institution to deal with transparency, integrity and equality of access – three pillars of a proper lobbying regulation.

Who are the leaders in lobbying today?

One of the major concerns in our days is the subject of digitalisation. This subject of internet regulation is number one on the EU lobbyists’ agenda. As a matter of fact, we can notice that Big Tech had invested considerably in lobbying in Eu during these past six years. Google is now leading the race. Its expenditures had reached the tipping score of 8 million dollars. And Big Tech companies do not only try to bring European politician by their side they are also very proactive at lobbying in Washington. Together they spent nearly half a billion on lobbying over the past decade. 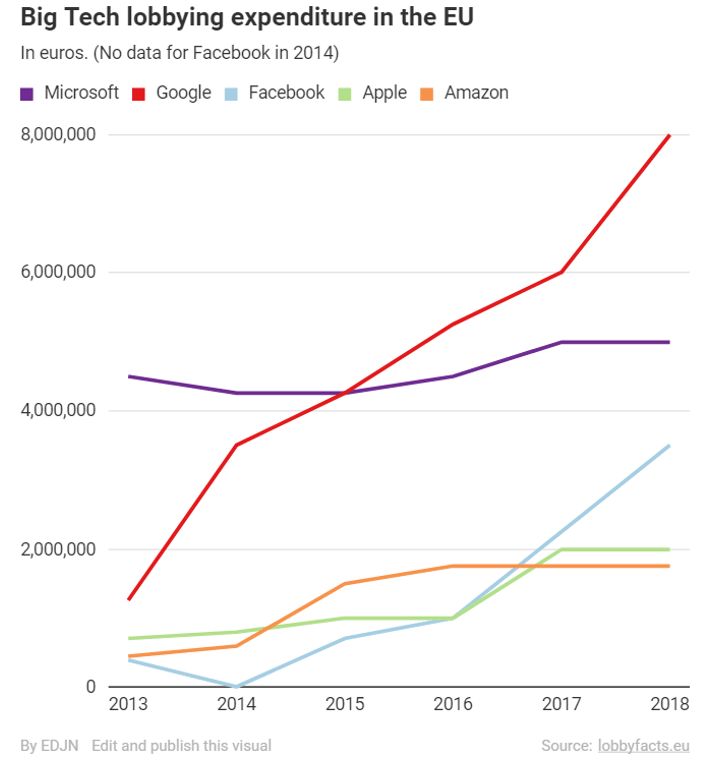 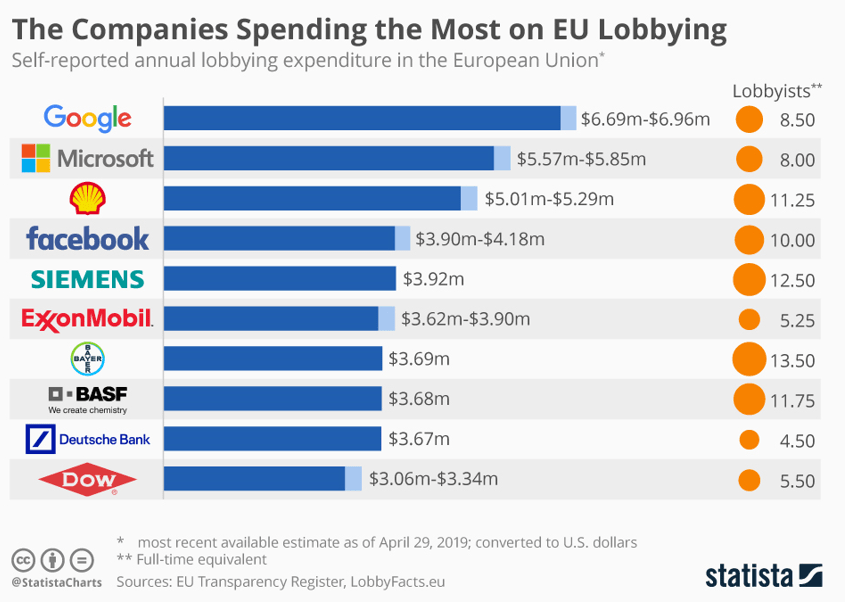 These trends are certainly not going to be reversed somehow. On the contrary, the actual Covid-19 pandemic is a dreamed occasion for GAFAM to go into action. something that Naomi Klein would call the “Shock Doctrine” – using unprecedent disasters to implement neoliberal policies. This situation presents them a great opportunity to erase past failures related to privacy and data protection scandals. GAFAM are already boosting their profits compared to 2019 (see charts). The trade organization DigitalEurope on behalf of tech giants is promptly advocating in favor of an increase in public funding towards the digitalization of various sectors. Such requests as the deployment of 5G networks, fast-tracking, boost of investment for AI in health sector and, last but not least, the creation of a European health data space were presented. 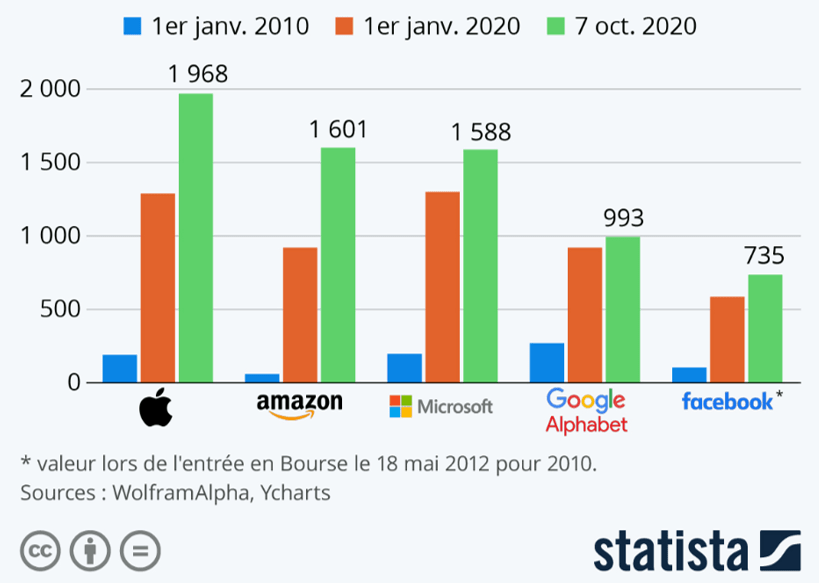 Another powerful weapon in the hands of behemoths is the argument for investment in data centres. In France for instance this project will generate about 4.5 billion euros of investments. Such heavy funding creates a considerable imbalance in decision making as much as it creates strong state dependence that may hinder impartial investigation. In other words, the investment on such a scale creates biases in authority’s judgment. It is a hinder to proper scrutiny due to the value of this investment to its economy. The digital sovereignty is clearly at risk.

A pressing need for regulation

Fortunately, the situation is not so desperate. On the other side of the Atlantic where people have a more pragmatic view of lobbying, authorities are trying to tame their tech beasts. This October House Lawmakers had condemned Big Tech’s behaviour accusing them for exercising monopoly power on competitors and abusing of dominant position. This action certainly wouldn’t be possible without a civil society mobilization. Numerous lawyers, activists, economists and academics armed with funding of billionaire sponsors stroke Google by advocating in front of regulators and state investigators. It is true though, for quite a long time the US society and its government had been very tolerant about this situation. But recent scandals (election manipulations, unfair competition, fake news, cyber bullying, etc…) rose a real public awareness. A lot of academics had written papers and books on the topic, such as “The age of Surveillance Capitalism” by Shoshana Zubof to criticize they way the digital world and internet are designed. More recently a documentary “Social Dilemma” on Netflix tackled the same subject.
This perfectly demonstrates us that lobbying for good is possible on the old continent too. And rules had been already written, it only remains to apply them properly. For instance, Transparency International had written a report with analysis and recommendations for EU institutions. Here are some of them:

“Review immediately all laws, policies and practices on access to information in countries where acute problems were found. Access to information laws should adhere to fundamental principles and all information must be considered “public by default”, including data on lobbying.” “Establish and strengthen existing registers of lobbyists by making them mandatory and requiring timely registration and periodic reporting on activities by all professional lobbyists and organized interest groups.”

And as our world is globalized it would be appropriate if there was a synchronized international regulation such as the International Standards for Lobbying Regulation.

By Alina IBRAGIMOVA, student of the Master Intelligence Economique et Stratégies Competitives of the University of Angers

Statista, “The Companies Spending the Most on EU Lobbying” by Felix Richter, 29 Apr. 2019 https://www.statista.com/chart/17837/companies-spending-the-most-on-eu-lobbying/

The Washington Post, “Tech giants led by Amazon, Facebook and Google spent nearly half a billion on lobbying over the past decade, new data shows”, Tony Romm, 22 Jan. 2020
https://www.washingtonpost.com/technology/2020/01/22/amazon-facebook-google-lobbying-2019/