In the past, countries had to develop all the upstream capabilities and perform all the major steps of the value chain to industrialize. Today, globalization and trade liberalization allow multinational firms to combine the advantages of different places and to increase their productivity, efficiency and competitiveness through offshoring and outsourcing strategies. Through linking into these international production networks, African countries can now integrate into global value chains (GVCs) and initiate their industrialization without having all the upstream capabilities in place. (AfDB, 2014; OECD, 2013).

The current rise of the Global Value Chains (GVCs) offers real opportunities for African industries. In the context of globalization, every country is trying to get the best of international production and/or the distribution networks it integrates. In this sense, the recent studies in this field agree on the fact that in Africa, although the integration of many countries into GVCs is relatively high, it is not accompanied by creating value for the economies of these countries. This article aims to contribute to the understanding of these causes while discussing what strategy African countries should conduct in order to get the best of these GVCs.

According to Porter (1985) who introduced this concept for the first time, a value chain is a chain of activities that a company develops to produce a valuable product or service. It includes conception, development, design, logistics, assembly, distribution and marketing activities that are required for this purpose. When these activities are totally or partially segmented across different countries around the globe, they form what we call the global value chain (Gereffi, 1996). However, such activities don’t have the same contribution in terms of added value, some are more very useful, others are less, and this may explain why many multinational corporations (MNCs) are opting for the internationalization of their business (offshoring, outsourcing, etc).

In the African context, countries are largely integrated into GVCs as simple suppliers of raw materials and inputs for other countries’ exports. They import goods or services, process them and re-export them. In other words, African’s participation in GVCs is limited to lower value activities, like supplying, assembly and logistics. However and as it is commonly recognized, the highest value-creating activities are those of product design and management, research and development, marketing and other high-wage activities, kept in the home country, that concentrate the most of the value added.

This is why China, where the iPad and iPhone are assembled for example, does not receive a large share of value created from these products. Simply, because there is no, or little, value in electronics assembly. The highest value goes to the United States where Apple keeps its highest-value activities and pays high wages to its “American” employees and stockholders (Dedrick et al., 2009). 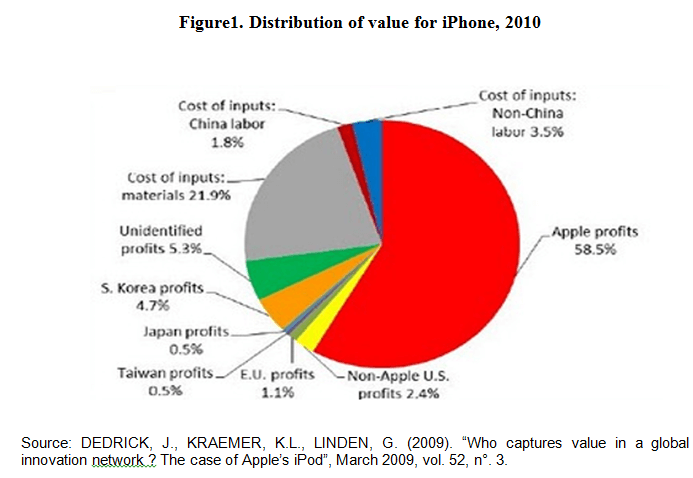 In Africa, although many countries are content to capture a marginal share of the global value, the benefit that this position represents can be justified on several levels. The main advantage is its positive potential contribution for growth and creating employment, especially through assembly and joining activities which are not very demanding in terms of quality. They are the stages of the chain that provide the greatest number of jobs. Given that a large part of the income of the poor and middle class comes mainly from these jobs, it would certainly be very risky to abandon them, especially in those countries where several socio-economic problems still persist such as unemployment, social unrest, or instability.

So, these reasons explain why African countries should conduct a dual strategy which keeps the current activities while developing and increasing their participation in these international networks of production, which implies complying with two imperatives: integration and upgrading in GVCs. Both integration and upgrading constitute a real source of structural transformation for the African industry. The continent is rich in natural and human resources, a wealth that gives them advantages similar to those of Asian countries only if it is accompanied by this dual strategy.

The first requirement is the participation itself. In this sense, efforts should be concentrated in the preparation of adequate infrastructure to improve the supply chain. For example, a railway logistics for the mining industry, ports for the automotive industry, roads for other industries, etc. because insufficient logistics involve additional costs and thus reduces productivity (AfDB, OECD and UNDP, 2014).

The integration strategy should also pay particular attention to the business, or industrial, ecosystem that forms an economic community in which networks of organizations including customers, suppliers, partners, competitors, producers and other stakeholders form together a system of mutual support (Moore, 1990).  At this point, it is interesting to recall the case of Zimbabwe in the 2000s where the lack of reliable supply of parts and components for the automotive industry, due to a shortage of available funds, notably foreign currency, has led Willowvale Mazda motor Industries (WMMI), a subsidiary of the Japanese group Mazda, to close its workshops (Chenghua Yu, 2012).

In Morocco, efforts are being made in this direction, which gives rise to a great number of ecosystems. They affect all industries such as automotive, industry of extracting, textile & clothing and aeronautics (Medias24, June-2014). For the energy sector, the country continues to develop its renewable energy through the Morocco Solar Plan (MSP).

The importance of business, or industrial, ecosystem lies mainly in its ability to attract more multinational companies, notably central companies, through ensuring a healthy business environment and providing platforms necessary for their implementation. A properly developed business ecosystem plays an important role as it creates positive externalities, in terms of employment creation, labor productivity, creation of new small firms, etc. and as it allows companies and all members of the ecosystem to co-evolve their capabilities and roles, and especially small and medium enterprises (SMEs) to integrate into these external networks and thus increase their learning opportunities (knowledge sharing, exchange information, transfer skills, expertise, know-how, etc).

Through linking into international production networks and learning opportunities, African countries and firms can upgrade their participation in GVC to capture a higher share of the global added value. An upgrading strategy is defined as moving from less to more productive stages, from lower to higher-value activities like research & development, sales, distribution & marketing, which makes it possible for these countries to take advantage of this to integrate into GVCs, especially in terms of industrial development. (Kaplinsky and Morris 2001, Humphrey and Schmitz, 2002; Bair and Gereffi 2003).

This should be the case for example in the industry of extractions. Thus, countries that are exporting natural resources have to create value in their exports through a transformation process which leads to extract derivatives and intermediate products and thus adds more value than raw materials. Actually in Morocco, the state-owned company OCP is aiming to expand its current mining centers and processing plants, and build new ones (phosphate cleaning plant, pipeline, new mines, etc) in order to increase production capacity and reduce costs. These projects may allow the company to add more value which helps offset the decline in phosphate price (OCP; Oxford Business Group, 2014).

Economic upgrading can be not only a source of structural transformation for African countries but also a source to diversify their industries. This diversification consists to reallocate resources from traditional and/or mature sectors/activities, for which the country lacks the resources and skills required, to set up new and more productive ones. Indonesia, for example, has reinvested its oil revenues in fertilizer production for which the demand has increased as a result of its agricultural policy. Malaysia actually reallocates its oil revenues towards high-value activities and, therefore, develops efficient industries. Chile also uses its revenues from copper to develop and export new agricultural products not exported before. But in African countries, with few exceptions, the incomes of raw materials are mostly spent without a real (re) investment.

For SMEs, if integration into GVCs was relatively easy, upgrading strategy could be difficult and problematic. It depends on a range of services and requirements (low barriers, efficient logistics, fiscal incentives, etc.) in order to obtain advantages in terms of quality and competitive price (AfDB, 2014). Because the more they move towards strategic stages, the higher the competition is. In this sense, the state should also facilitate and encourage a massive transfer of knowledge and technology by encouraging multinationals to develop partnerships and build linkages with local SMEs. Tunisia, for example, was experiencing a certain dynamism in textile & clothing, tourism and service sectors. But due to so many rules and regulations which separate exporting companies (offshore sector), integrated into the GVCs, from local firms (Act 1972), there was no, or little, impact on the local industry, therefore, the upgrading opportunities in the value chains were less favored (AfDB, 2014).

Let us return to the case of Apple’s iPhone and iPad in China which clearly illustrates how the Chinese authorities have implemented a dual strategy. In short, the production of the iPhone, which leaves very little value to the Chinese industry, has been kept and, in the same time, relocated through internal relocation in the poorest provinces, in the north, given its impact on employment. Today, the largest production base of smartphones in the world is situated in Zhengzhou where hundreds of thousands of workers are employed, notably in the Foxconn’s largest factory worldwide.

Moreover, China, after integrating into GVCs by assembling electronic products, has undertaken a progress strategy by developing its own high-tech products in the coastal/richer areas that create high value-added products. Today, three of the top five Smartphone vendors are Chinese; Huawei, Xiaomi and Lenovo.This strategy is instrumental in building China’s industrial development and keeping up its leadership position over time.

For Africa, this article shows that African’s integration into GVCs is still limited to lower value-added activities but, in the same time, opportunities for upgrading to higher levels still exist. However, this depends on a range of requirements. In this sense, African countries should open up to trade, prepare efficient logistics, promote transfer of technology and build business ecosystems. In short, they should conduct a dual strategy in which they combine both integration and upgrading in GVCs to generate high value which is a prerequisite for their industrial development.