Until this morning, the total views on this topic have reached 240 million, and the amount of discussions has reached 376,000.

So who is LI Zeyan? Is he a new super star? Also at the same time, BAI Qi, ZHOU Qiluo and XU Mo occupy the screen. In fact, they are the four main characters of a mobile game called « Love and Producer ».

Not long after this game has been put online, it catched up with the «Kings of Glory», (an adaptation of Arena of Valor for markets in mainland China, which is a multiplayer online battle arena. In July 2017, it was reported that the game had over 50 million daily active players and 500 million monthly active players. It is the world’s most profitable game and most popular free-download app). From the South China Morning Journal: « according to the latest data, Love and Producer in the Apple App Store download list has crushed the King of Glory, it has also replaced King on Weibo and it became the most frequently discussed game ».

I believe that many people still don’t know this game, let’s take a look at how the game’s storyline start: You took over your father’s television production and entertainment company. On the one hand, you need to flourish your family business, and on the other hand, you need to develop relationships with four suitors. All of them are handsome and they all love you so much. In the game, you can chat with them and even make TV shows for your sweetheart.

In particular, voice-over dubs can be said to be the essence of this game, making you feel those words are said to you, so you have a strong sense of immersion.

And the four characters also have their own style, so it can satisfy the different tastes of players, for example, bossy CEO, high IQ student, evil stylish man, and sunshine boy. There is always a suitable one for you. The characters will chat with you, and call you. They could even give you a hand and comfort your sadness when you are crying. And of course, you need to top up your game account. Because this game always stimulates you to top up, some people teased that: “Even if I spent my entire fortune, I couldn’t afford these four costly men”.

The game has changed the male-dominated game industry: “China’s game market has been dominated by men for a long time, many applications are using “virtual girlfriends” to attract people, while the explosion of “virtual boyfriends” of Love and Producer represents a new direction.

Through Love and Producer, it seems we have seen the future of the singles: find an artificial intelligence to fall in love.

The hot romantic science-fiction film «Her » (2013) tells the story of an otaku falling in love with an intelligent computer operating system personified through a female voice in the near future.

Samantha is the female voice of a talking operating system (OS) with artificial intelligence, she has a sexy, magnetic voice. Every morning when the otaku wakes up, she will be happy to greet him; every night, she says goodnight to him with a husky sexy voice.

She manages file for him, urges him not to stay at home, and plays multiple roles for him: assistant, comforter, partner and savior, but she never complains. She is a perfect partner, even though she is just software. This operating system is considerate, humorous, perfectly fit for all your imagination, and the otaku hopelessly fall in love with her.

This movie shows such an idea: if a robot with advanced artificial intelligence can imitate human dialogue, companionship and affection, and can be tailored to anything you can imagine, it is not difficult to think that the robot will replace the real but defective human, and become your emotional projection target.

In the film, everyone is talking to the computer operating system in the headset, it looks like they are talking to themselves, but they all have happy smiles on their faces.

If this is the future of human emotional communication, will you feel happy or lonely?

What is Artificial intelligence?

Artificial intelligence (AI) is the intelligence shown by systems and machines, in contrast with the natural intelligence (NI) displayed by humans and other animals. In computer science, AI research is defined as the study of « intelligent agents »: any device that perceives its environment and takes actions that maximize its chance of success at some goal.[1] It is artificially created, unlike human intelligence. Now we get to see artificial intelligence in our daily life as well. The best example is the GPS on our smartphone.

Robots can do the task assigned to them without the help of humans. The systems just have to be programmed in the right manner. We can say artificial intelligence is a boon when considering some factors, but at the same time, it has certain disadvantages too.[2]

What are the present and the future of artificial intelligence technology industry in China?

1. The speech recognition technology is the earliest AI technology

In 2015, Nuance and Google accounted for 59.3% of the global smart voice market. At the same time, Google, Apple, Microsoft and other technology giants combined shares of more than 55%, and Nuance, Itex communications accounted for about 37% of shares of companies in the two traditional technologies. Predicts 2017, the global intelligent voice industry scale up to $11.24 billion, with a CAGR of 35.1%. In the Chinese market, FTTE accounted for only half of the market share of 49.6%, together with Baidu to occupy in China about 75% of the smart voice market share. China’s smart voice market is still in the stage of oligopoly, the future may be the transition to monopolistic competition. In 2016, the scale of China’s voice industry reached 5.93 billion yuan, an increase of 47.1% over the previous year. It is estimated that the scale of China’s voice industry will exceed 10 billion by 2017. 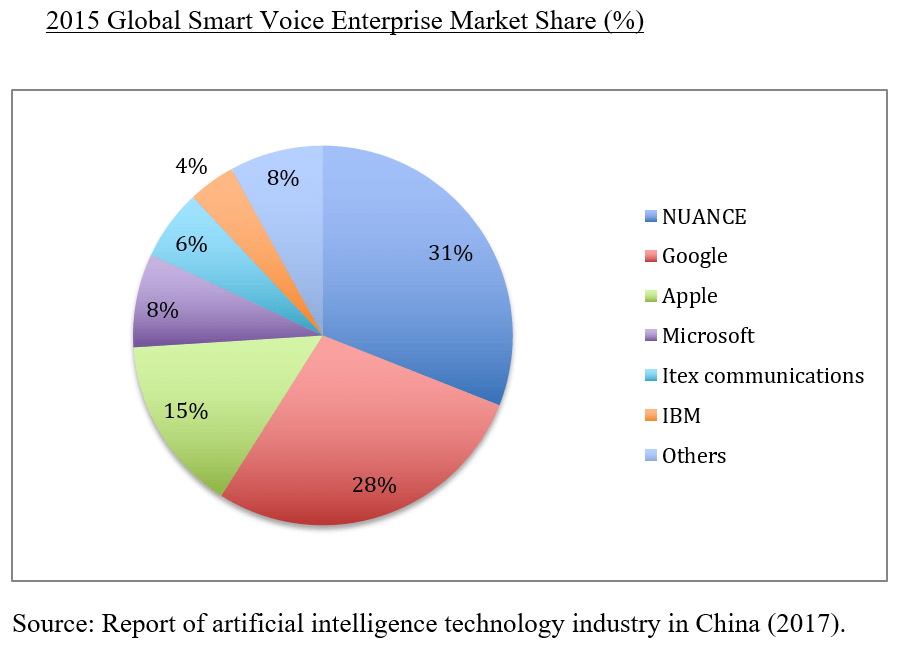 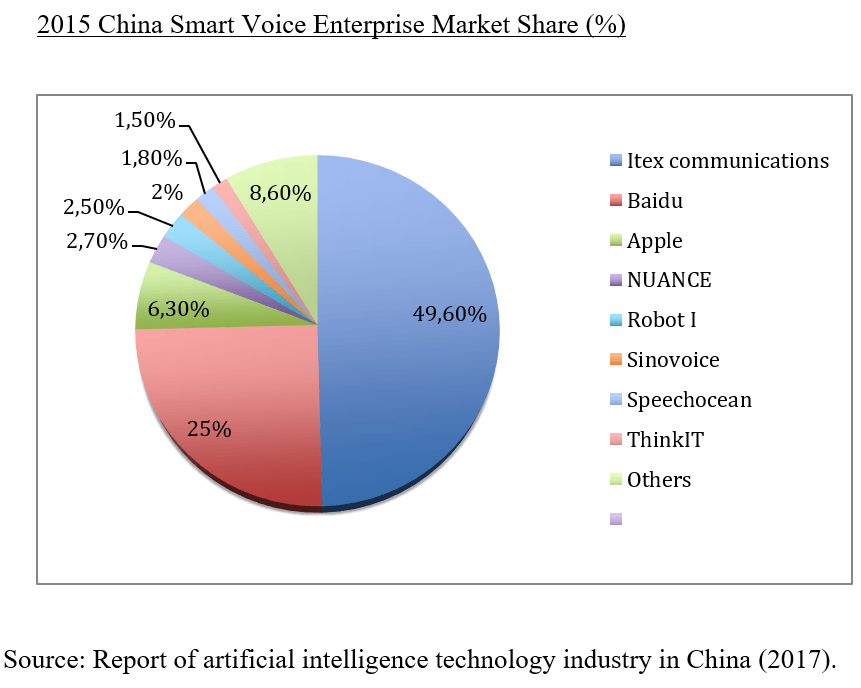 Baidu brain application in the field of speech recognition 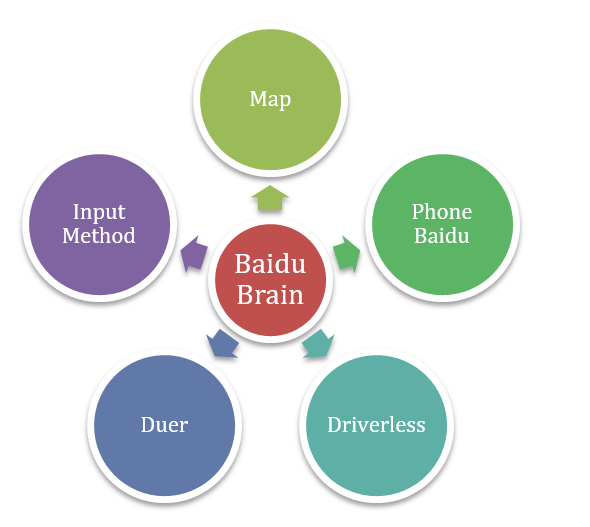 Computer vision is one of the main basis of artificial intelligence technology, including information collection, model training and recognition. Presently, computer vision in the field of image recognition and face recognition has achieved higher accuracy. In March 2014, the Gaussian Face algorithm by Professor TANG Xiaoou from the Chinese University of Hong Kong, with an accuracy rate of 98.52% on the LFW database, and the recognition broke through the first human identification in the world (Source: Guangming Daily Journal). In 2015, Image Recognition Contest ImageNet ILSVRC Champion The ResNet Recognition only has a 3.57% error rate, exceeding human limits.

Face recognition technology has experienced the face detection and analysis, face retrieval, facial features matching, live testing phase, from Tenxun UTP laboratory face recognition program in the face of the latest test results submitted under the conditions of the test results 99.8%, the highest in the world (Source: TenxunTechnology).

The global market for cognitive and AI systems will grow ny 59.3% in 2017 to represent $ 12.5 billion, the largest of which is in cognitive applications ($ 4.5 billion). In the future, the market size in this area will maintain an annual growth rate of 54.4%. By 2020, the market size will reach $46 billion. In terms of geographical distribution, the United States remains the largest market in this area with a market scale of US $ 9.7 billion in 2017 and Europe, Middle East and Africa (EMEA) as the second-tier market. However, Asia-Pacific region with strong growth in 2020, the market (Japan CAGR up to 109%) will exceed the scale of EMEA.

Artificial intelligence is our future, but will it save or destroy humanity?

[2] Advantages and disadvantages of AI: http://www.indiastudychannel.com/resources/173143-Artificial-intelligence-its-advantages-and-disadvantages.aspx